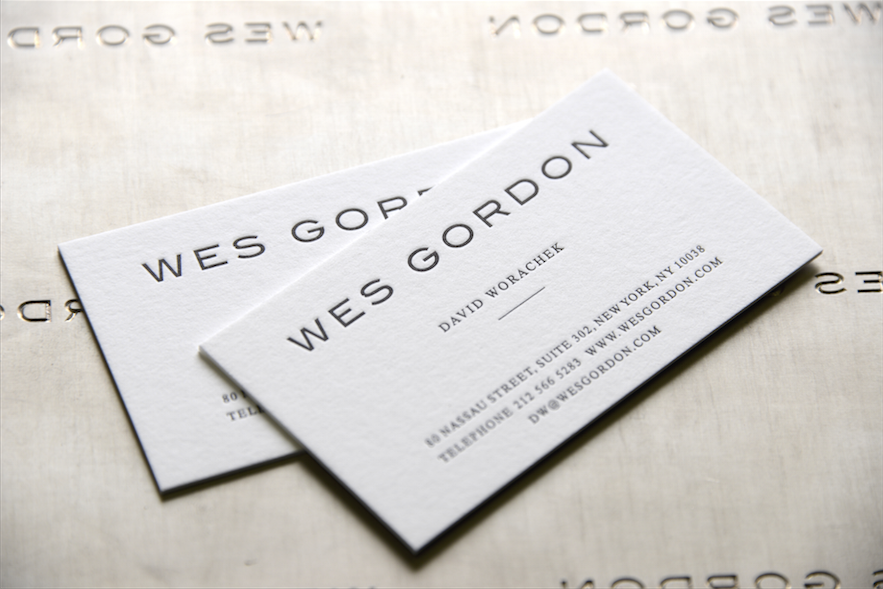 We frequently have visitors in our NYC print shop asking for some sort of 3-dimensional effect on their business cards. They usually want the ink to rise upward off of the surface of the business card. Being that they aren’t print professionals, they tend to incorrectly refer to this effect as embossing. Granted, embossing by definition would fit the description, it’s rarely what the consumers really want. This blog post is dedicated to describing the differences between the most common types of 3-dimensional effects.

For starters, the effect that people are seeking is “Raised Lettering”. This can be described as lettering (or any print on your design) that projects upward off of the surface of the paper. When the business cards are held, you can actually feel the raised letters or other print when you rub your fingers over the surface. This effect is very impactful, and it makes business cards really stand out. Its also something that isn’t offered by all print shops here in NYC, or anywhere else in the country for that matter. Maybe as little as a third of commercial printers care to offer this service. So in a nutshell, not everyone can do it.

There are 3 ways to make your printed elements raise upward off of the paper: Embossing, Engraving, and Thermography. Each of these methods offer similar 3-dimensional effects, but they are produced in totally different ways. As a result of their different production methods, their costs rage quite dramatically. They also have unique features that make them more appropriate for certain situations.

The first method that we will discuss is embossing. Embossing is an effect that presses a pattern into the paper, making one side indented while the other side rises upward off of the paper. This method of creating a 3-dimensional effect does not require any ink. Its can be done so called “blind” where just the paper holds the pattern. Embossing is achieved by engraving a couple of plates – typically only one is metal – with your business card design. One of the plates has the design etched into it, while the other has an outwardly etched pattern on it. After these plates are engraved, a sheet of paper is sandwiched between the two plates. When the so called “male” and “female” dies are pressed against each other, a permanent pattern is pressed into the paper.

Embossing is notable for its ability to be done without any ink. This characteristic allows patterns to be pressed into the paper before or after the paper is printed on. As a result, a complicated image or logo can be raised because they are decoupled from the embossing process. They can be printed flat and raised after the fact with embossing. The major drawback of embossing is that it is expensive. Just to engrave the plates it could cost $500-$700, excluding printing. Unless you have a high volume of business cards that need to be printed, embossing is impractical. The key is to have a high volume business card order so the cost of embossing is spread across many cards, lowering the unit cost. The other main issue of embossing is that the pattern is visible from the back of the card. This makes it very impractical for double sided printing.

The next method is called engraving. This method of achieving a 3-dimensional effect on your business cards is very similar to embossing. The main difference is that there aren’t two dies that press into each other. There is just one engraved plate that is used. Other than the number of plates used, the production process is very similar. With engraving, ink must be used. With engraving, no patterns are pressed into the paper. Only the ink has the 3-dimensional effect. That would be the main production feature that separates engraving from embossing.

Engraving is known for its genuine raised ink finish. Unlike other raised ink effects such as thermography, engraving actually has solid ink that can be felt, projecting off of the surface of the paper. This is appealing because the color accuracy is very predictable. The ink itself also looks very refined, and elegant. It doesn’t have any shine or bubbly texture, like thermography. Despites the appeal of engraving, it does have drawbacks. Perhaps the most significant one is its price. Like embossing, engraving is very expensive for small quantities of business cards. If you wanted to have engraved business cards, it would be wise to order in bulk so the cost of engraving the metal press plate will be spread across multiple orders.

The final and most popular method of achieving a 3-dimensional effect on your business cards is called thermography. Thermography is achieved by first printing your business cards on an offset press. While the ink is still wet, the sheets of paper are sent through a powder bath of a special thermographic powder. The powder sticks to the wet ink as it travels through the bath. Once they are coated with powder, the sheets are sent through an oven which melts the powder and causes it to rise upward. This process is by far the most popular method of printing business cards with raised ink.

The reason thermography is the most popular method of achieving raised lettering is because of its price and practicality. It costs a fraction of what embossing and engraving cost. Despite its affordability, it does have a few drawbacks though. The most apparent one is that the finish is very shiny. This makes the less appealing to some people who find the shine to be cheap looking. They also have a bubbly texture. Its almost like a very large grain sand paper. This texture is the result of the heating process. When the powder melts, it temporarily bubbles due to the heat. The result is an uneven surface that can be seen and felt. For most people, it adds to the appeal. But for some, its undesirable.

One more drawback of thermography and engraving is that they cannot be used for complex, multiple colored logos with fine detail. Due to this fact, images are ruled out as well. Everytime you see a business card with thermography or engraving, its usually for just a few colors. For example, the text on a business card might be black, while the logo red.

Hopefully this blog post helps to clear up some of the confusion surrounding having your business cards printed with raised lettering. Its something we do quite often, and I personally love the effect.